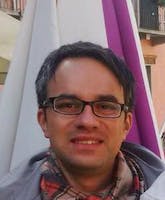 PhD in Near Eastern Archaeology

Davide Nadali is researcher in Near Eastern Archaeology at the Sapienza University of Rome since 2012.

Since 1998, he is member, as archaeologist, of the Italian Archaeological Expedition to Ebla with appointments as field supervisor since 2000. He in involved in the ERC funded project on Ebla and its landscape as member for archaeological surveys in the area east from Ebla (Tell Munbatah and Tell Sakka).

His main interests of research concern: art, architecture and urbanism in the Assyrian period; the study of ancient warfare; the use, meaning and reception of the production of images and pictures in ancient Mesopotamia and Syria with articles as single author and co-authored studies on the impact of pictures in ancient societies.

In 2012, his three-years project on “Time through Colours: Analysis of Painted Artefacts in Their Archaeological, Historical and Sociological Contexts” has been selected and approved within the national funding “Futuro in Ricerca 2012” of the Italian Ministry of University and Research (MIUR). Dr Nadali is Principal Investigator of the national project and responsible of the research unit of the Sapienza University of Rome.

Since 2014 he is co-director of the Italian archaeological expedition to southern Iraq in the site of Ningin/Nina in the ancient State of Lagash.

Recovering the Humankind's Past and Saving the Universal Heritage